Comprehensive Guide to Applying to Comiket as a Circle ONLINE

Here we are, the long awaited "How to Comiket 2"

Welcome Ladies and Gentlemen of the Doujin world, it is I Kxela here, back from a one year absence of not posting on this blog. However, I have been attending and applying for Comiket every chance I got within that year- learning valuable info on how to Apply for Comic Market Online. I took this chance to apply for the Next Summer Comiket (Comic Market 82, Summer 2012) to make a Tutorial on how to apply for Comiket through their online procedures!

There are Two Physical things you need:
1. The Comic Market Circle Application Package
(refer to previous post to see that it looks like)

The couple other things you must have to complete the registration:

Basically with all of those you shouldn't have a Problem applying online. 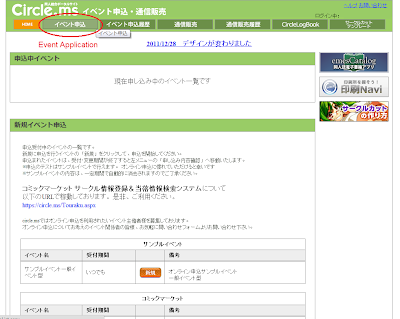 Once you complete that scroll down Until you see the button options for Comic Market:
Comic Market is コミックマーケット
Click the top one for a normal Circle table.
Click the second one if you happen to want a double combination circle table
(Two application packets are required for this I believe. Don't do it if you don't know what you're doing) 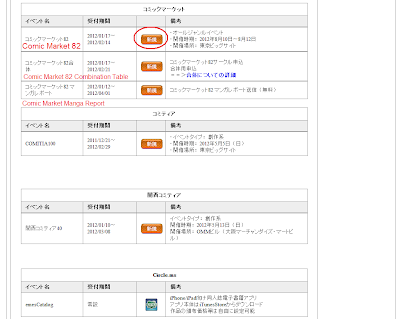 New title, "The Comprehensive Guide of How to get into Comiket as a Circle 1"
otherwise known as "How to Comiket 1"

This How to Get into Comic Market post was originally on my Deviant art Journal but I see it appropriate to have it posted here as well. I plan to do a second "How to Comiket 2" Soon!

If you'd like to know how to apply online, Guide #2 is up:
http://circlerevolution.blogspot.com/2012/02/comprehensive-guide-to-applying-to.html

Well, since I've successfully got myself into comiket, I've had a buttload of notes sent to me asking how they can participate in comiket as well.

I've gotten tired of answering each and everyone so I am writing this and forwarding all such notes to this journal. yeah.

If you dont know what Comiket is, here- http://en.wikipedia.org/wiki/Comiket

FIRST AND FOREMOST, the ABSOLUTE REQUIREMENTS-
1) An address in Japan. I made off with my relatives address so, you don't really have to live there. It's just a location to send you stuff. However, they won't accept foreign addresses- so if you don't live here best bet is to find someone willing to let you use their address. Make some friends.

Long name, but to make it short- it's a little booklet containing all the paper work needed to apply for Comiket. AKA- The Application Package. 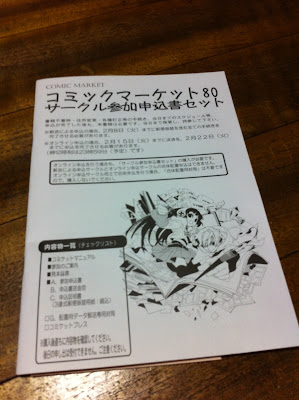 Whew, It's been a while since I posted on the Circle Revolution blog, so here's whats up:

Wow I haven't even posted what happened after I applied to comiket here eh?

Well, to simply explain- I went through a mess to find out if I made it or not, then found out I made it but never got the accepted package; so I had to fill out a mis-delivery form, then wait a week, and then finally get the news that I finally got the package to participate in comiket. That was in November. The rest of that month I spent working on my books. I chose the Touhou Category, since I'm into Touhou and its like one of the biggest genres of comiket.

I made one Doujinshi and one Illustration book. My Brother made a Doujinshi. I also sold my Nightmares Cure book.

For a more indepth look at how things went see my regular blog: http://kxela.blogspot.com/search/label/Comiket


Well, it wasn't official, but that week I had my first Circle Revolution group.
Me and Arima-Shiro from Spain shared the table (even though she had one book), I asked a few people if they were able to come to comiket and if they want to join my table.
I was able to meet these people:

I came to the conclusion that, because I've been through so many artist alleys in the US, I've pretty much learned how to fill my table up to the max. Sharing my table was a bit tricky, though I had planned it in advanced.

I entered as circle name "Kxela" lol. A Indy circle that lets people come in and out at random times I guess. But for what I had, It pretty much took up the whole table.

So in the future, I want to set up THIS group as "Circle Revolution" apart from my own circle "Kxela".... Of course that group name is still pending, as I dont have much of a group yet. HOWEVER! you get the gist of it.


...Because The deadline for comiket 78 is coming, I need to apply soon. Doesn't seem like I have a tangible group to make a circle for this project, so I'll be applying as myself again.

The trick here is- What category to sign up as?
Comiket is a convention that allows parody comics and original comics. We ran into the problem where my stuff was Touhou and Arina's book was Hetalia. Of course being in the Touhou section people there were looking for Touhou. As a result the Hetalia book didnt get much attention.


...So see here, there's quite a bit to think about just entering comiket.
Since peoples interests differ its hard to gather a group and say "yay were at comiket"

So when there's enough people, there needs to be a decision- original? or a group aimed at some catagory?

Circle Revolution isnt really ONE group we need to make, rather it should be a group to help each other aim for their goals. Meaning? Well whether you are just one person by yourself wanting to participate in Comiket or other cons, OR if you are already a group and need help getting to steps to applying to comiket, this should be the place to reach those goals.


I think though, from the people that seemed interested, that it wouldn't be so hard to put together an all original group since from what I gather most of the people like to make their own comics (thumbs up)

Anyways. Yeah. I'm pretty much here blabbering to myself, I'm gonna add a comment box for the site, give your thoughts and comments freely :D

Was redesigning all of my Blogs today, this one was last and I decided to use the drawing of Lelouche (from Code Geass) since he sorta fits the "Revolution" Title lol

Comiket Circle Entry Results soon.
I applied for comiket this summer for Comic Market 77.
Probably the biggest step in helping this group out if I manage to get in this time. With experience of not only attending comiket but being a circle in it, I will have the knowledge on the process of applying, entering, and actually becoming comiket (...weird way to put it)

I also want this to get the people of this group into marketing themselves as Doujin/Indy Artists, although many have already done so by posting their own stuff online and going to conventions and that sorta stuff.

More ahead. Until then!

Circle Revolution is a Project by Kxela to assist artists who want the opportunity to promote their works, aim for creator conventions like Comic Market and others in Japan and around the world. This is the main blog for the group, those wanting to participate should start by following this blog :)

Your main interests are...